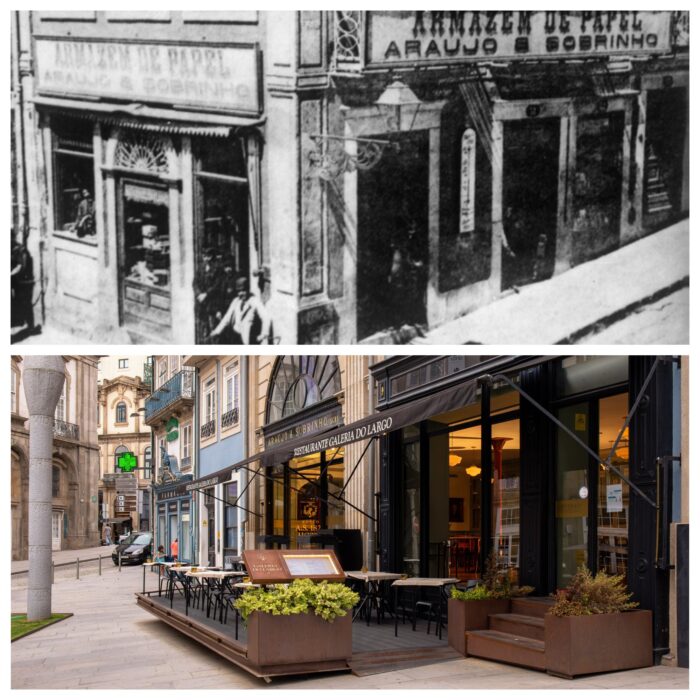 This is yet another true story among many about the mythical Papelaria Araújo & Sobrinho.
In the center of the “old” city of Porto, next to Rua das Flores, the main artery of the historic area was born a restaurant that was once an art gallery and a barber shop. How does this happen? Certainly, you’ve heard of Papelaria Araújo & Sobrinho (if you don’t know it yet, here is the story, to read in 3 minutes or less). The gallery I speak of and the barber shop were spaces within the stationery building – which was once a world with many square meters, with the entire ground floor and upper floors occupied.
Since 1829, the year of launching, the stationery has been growing to meet demand; the offer of products increased and the volume of business also increased. At a certain point the number of employees was already considerable and the idea came up, to create an exclusive barber shop for the employees’ convenience, today the restaurant’s kitchen area.

The now dining room was the stationery store and also an exhibition place for paintings by artists still unknown to the public (although the works were scattered throughout the stationery, there was no single exhibition site).

At Araújo & Sobrinho stationery, existed everything related to painting and sculpture. Most of the painters in the city, the surrounding area and the country were costumers. “There were artists who had no money and paid with pictures, which were offered or displayed for sale,” says Henrique Araújo, great-grandson of the founder.

It was undoubtedly an ideal place to exhibit. With a window to Largo de São Domingos, where in the 19th century, a crowd of people and horse-drawn carts passed to frequent the shops of merchants and goldsmiths on Rua das Flores. Porto was one of the most important merchant cities in Europe, with the Port Wine trade expanding.

The current Galeria do Largo has the soul of successful painters and traders who once lived there and exchanged secrets.

By the time one of the Hotels’ group project, designed by the Arquitectos Aliados studio, took its first steps, it was already known that on the front of the building it would be the location of the hotel’s restaurant, for all the space’s symbolism and the architecture of  the windows with big glasses to the historic center. In the decoration there is well-crafted furniture, inspired by the old furniture of the stationery (counters, cabinets), the aim is to recreate a little of the history of what the room was, including chairs inspired by the old ones of Porto’s cafes: to allow customers to travel in the time.

On the walls, it shows the genealogical and historical dimension of the Araújo family, with pictures of different generations of owners. The paintings are the works of notable artists from Porto: Souza Pinto (1856-1939) and António Carneiro (1872-1930), unknown to the public in those days; when they went to the stationery shop to purchase different materials.

In 2020, at Galeria de Largo, you don’t paint or cut your beard,  instead the art of cooking and eating is performed.